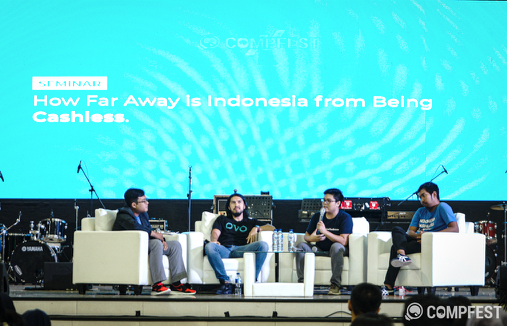 On the last day of the COMPFEST Main Event, a seminar about cashless behavior in Indonesia was held. Let’s see the overview of the seminar in this article.On the second day of the COMPFEST Main Event, a seminar with “How Far Away Is Indonesia From Being Cashless?” was held.  The seminar was held in Balairung Universitas Indonesia, last Sunday.  At this seminar, we invited speakers that have a strong background in the digital payment field. The seminar started by Rizda Dwi Prasetya as Tech Lead of Integration at Midtrans as a moderator. The speakers are
Yukie Iskandar as the Head of Business Partnership at OVO, Kelvin Gani, as Vice President of Product at Moka, and Rangga Wiseno, as Vice President of Product at DANA.The first speaker of this session is Yukie Iskandar. He started with the data on internet and smartphone penetration in Indonesia. Internet penetration in Indonesia reached 64%, but this result filled with the major number of Java Island populations. Just like the previous penetration, smartphone, and banking penetration in Indonesia, the overall development in Indonesia hasn’t done yet. But, that major number could increase the usage of digital payment in Indonesia. “Non-government side support the national cashless movement is keep increasing from 30 percent in 2016, to 50 percent”, the speaker says.  He also said that Indonesians are hyper reacting to this movement, even though their eyes are still on the promotions or rewards. It is marked by the account that registered on, has increased from 90 million in 2017, to 250 million in 2019. Also, transaction value per 2019 reaches 47.2 billion rupiahs. Also, merchants are being enthusiast, because it doesn’t take much time to register at digital wallet payment. The reason why anyone is trying to compete in the digital wallet world is that Indonesia has a lot of citizens. Also, Indonesian could be seduced by promo or rewards. Indonesians use a digital wallet to pay for online shopping, bills, data voucher, etc.The second speaker, Kelvin, says that even though Indonesia is a potential market (especially its society), but there are a lot of barriers facing it. Some of them are merchants’ requirements and operational. Some digital wallet payments did not directly accept the merchant that registered, but it needs time and many important files. ” To beat that weakness, we try to convince the customer and merchant about its safety and convenience on using digital wallet payment”, Vice President of Product at Moka says. Speakers also say that without many EDC(s) and easier cashflow recording, are two big advantages of using digital wallet payment.The last speaker of this session is Rangga Wiseno, as the Vice President
of Product at DANA. He says that government support this digital wallet payment program because it’s one of a huge step to realize the Bank Indonesia program of Nasional Cashless Movement.  “National Cashless Movement has started in 2014, but in fact, the traditional banking system is not a good solution, because it doesn’t work properly and equal at every province in Indonesia”, Rangga says. In the question and answer session, all speakers said that in 2020, all business people and entrepreneurs will be embraced to use QRIS (QR Indonesian Standard), as a requirement for their business. Financial access is a basic right for everyone, so people could get more opportunities for themselves.